skip to main | skip to sidebar

Drumstick 2.0.0 has been released. There are four libraries now: 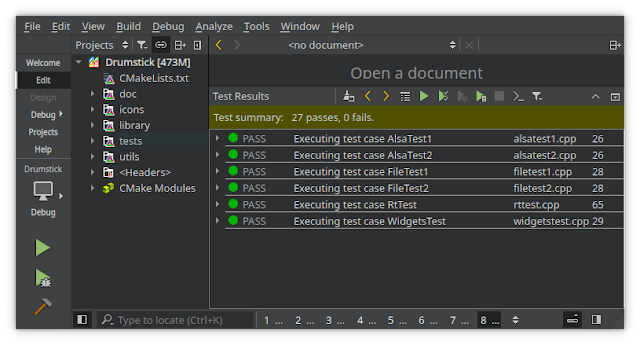 The new library Drumstick::Widgets includes the virtual piano widget used by VMPK and drumstick-vpiano, and also several configuration dialogs related to some Drumstick::RT plugins. The new features are showcased by the drumstick-vpiano application (and also VMPK, of course).

The piano widget has been improved with some new features, like providing a new signal carrying the played MIDI note name and number, new customizable palettes for the keys background and foreground (font) colors, configurable fonts, and many options for showing note names:

There is also a new plugin for QtCreator and QtDesigner with the name 'libdrumstick-vpiano-plugin.so' which is equivalent to the old Qt4 'vpiano' plugin. It provides design-time support for creating Qt applications leveraging the virtual piano component. Needs to be compiled with the exact same version of the associated Qt5 development tools.

Following the new Drumstick release, several programs have been released too:

SonivoxEas 1.3.0
Depends on drumstick::ALSA (Linux only)
This one is hosted in GitHub, and was presented in this blog before.

Finally a note about VMPK For Android. This app has been removed by Google from the Play Store, with some bureaucratic excuses. It never depended on Drumstick. I need to think about releasing it again, but never returning to the Play Store. I hate app stores.