skip to main | skip to sidebar

Drumstick Metronome (kmetronome 1.0.0) and Drumstick 1.0.0 Libraries in the Whole Picture

I've released in the past weeks some things labeled "Drumstick" and also labeled "1.0.0". What is all this about?

Drumstick is the name of a set of Qt based libraries for MIDI processing. Current major version of the Qt Frameworks is 5, which are binary incompatible with the older Qt4 libraries. Latest Qt4 based drumstick release was 0.5.0 published in 2010. Newest Qt5 based release is 1.0.0, published on August 30 2014.

Drumstick 1.0.0 is not binary compatible with the older one, nor even fully source compatible. In addition, it contains a new "drumstick-rt" library which is a cross-platform MIDI input-output abstraction. Based on Drumstick 1.0.0 I've released two more applications: vmpk 0.6.0 and kmetronome 1.0.0 (now renamed as "Drumstick Metronome").

There are other applications based on the old drumstick 0.5.0 libraries out there: kmid2 and kmidimon. I'm no longer the kmid2 maintainer, but I will release (time permitting) a "Drumstick Karaoke" application replacing kmid2, and of course also a new kmidimon (naming it as Drumstick-Whatever). Meanwhile, Linux distributions may have a problem here shipping the old and new programs together. Not a big problem, though, because the runtime libraries are intended to co-exist together on the same system. The runtime dependencies are:
If you want to distribute all kmidimon, kmid2, vmpk and kmetronome latest releases for the same system, you need to distribute also two sets of drumstick runtime libraries. This is possible because the old and new  drumstick libraries have a different SONAME. What is needed is to also rename the packages accordingly.

For instance, you may name your old drumstick package as "drumstick0" and the new one "drumstick1", or append the Qt name like in "drumstick-qt4" and "drumstick-qt5", or keep the old one as plain "drumstick" and rename only  the new one. Whatever makes you happier. These suggestions are for people packaging drumstick for Linux distributions. If you are compiling drumstick yourself and installing from sources, then you don't need to worry. You can use the same prefix (usually /usr/local/) without conflicts, except only one set of headers (usually the latest) can be available at the same time in your system. This also applies to the "-devel" packages from distributions.

There is only one thing left now. The whole picture :-) 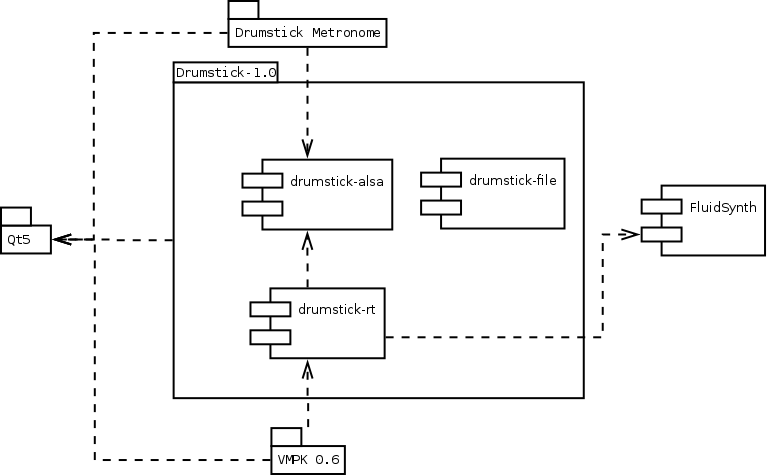